“Many attempts to communicate are nullified by saying too much.”

I recently had an extremely conscientious client who was pitching a quality product to new international markets. Her product was superior to her direct competition and, though the first to market, her foothold was well and truly lost. Her website was bursting with information, features and facts. But her targets had neither the time, the inclination nor the interest to wade through it. As they weren’t prepared to spend the time to understand product categories they were unfamiliar with, they were settling for her competitors and inferior product solutions.

Most businesses I work with really struggle to say less.

Their web pages, brochures and leaflets are bursting with words.

With features and lists.

They don’t believe me when I say that they expect way too much from their prospects. In terms of understanding what they do and what they sell.

Until I research it and ask their prospects to tell them.

Or they research it beyond their circles of well intentioned friends.

Until they hear it from the horses mouth.

Surfers take seconds to decide whether you will be their next forgettable business.

SMEs struggle to strip back their key messages to connect.

Connection is based on stripping back business messages to the bare essence; what they do, why do they do it and who are they for.

It’s harder to stand for less.

It takes much more time to distil down concepts, messages, products and services.

It’s much easier to say more.

And to say you do more.

To throw everything out there and to see what sticks.

It’s harder to be more interesting about a more defined idea.

It’s harder to do the stripped-down thinking and talking.

So keen are SMEs to appeal to more people, they unwittingly blur their message.

Making themselves forgettable or invisible.

Making their prospects take on too much of the brain work.

Saying they do more. And more and more.

The bottom line is that your prospects are time poor, suffer from information-overload and are looking for shortcuts all the time.

The way communications works is that if you can clearly show that you are the fit  ….  for someone like them ….. with a problem exactly like theirs …then you are in the consideration set.

Do the hard work and give them the shortcut they crave.

Your prospects need to hear about their exact problems … or particular needs UP FRONT from you, not buried in the sea of information you send out. Put simply, if it’s a website it needs to be on the home page. They need to connect with a business who really sees them. Who understands them. Who talks straight to them.

Businesses sometimes view advice on ‘target refinement’ as diminishing their market potential. ‘But that will reduce my addressable market, that would do me out of business!’. That depends on how much business you were realistically going to get from that market and how much you might get if you hone and specialise.

With an ‘essentials’ approach to marketing and key messages so you can use the communications toolkit so much more effectively. So when you communicate on websites, email, leaflets, business cards, ads, videos, tweets, Facebook posts and blogs; 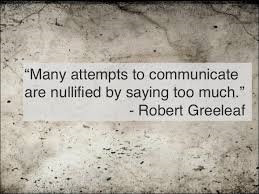